Big Sur in the Berkshires

Fred Seibert and Robin Sloane Seibert stumbled upon their Stockbridge home quite by accident. Robin grew to love the mountains while a student at UVM, but Vermont was too far from their residence in Manhattan, and ocean-front homes on Long Island felt too elitist. The couple stopped in the Berkshires on a whim, after dropping their son at college in Maine. They traveled with a shortlist of wishes for a second home: a vista location while avoiding isolation; a house with an open living space; access to a good, local bookstore; and a place within close range of Tanglewood. 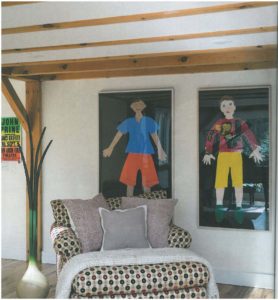 They liked the very first house realtor Tim Lovett showed them, which had a few of the sought-after elements but needed some major changes. Then they met architect Pam Sandler. “If we do this house correctly, we can grow old here,” Robin remembers seeing it. And that’s what they did. After an 18-month renovation, their wishes became reality. The home was transformed into a sanctuary to harbor their creative pursuits, where they could take time away from the city and immerse themselves in the beauty of nature. 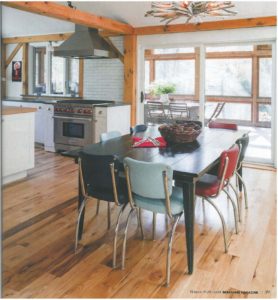 use, a 1970s post and beam, was incredibly dark. Every column and ceiling board on the first floor was stripped to expose the natural knotty pine. Sandler then turned her attention to

moving walls to create more openness, reminiscent of her clients’ loft in the city. Robin, an avid cook, wanted the kitchen open to the rest of the living area, and Sandler created a proper entrance—one that precluded guests having to navigate a dark mudroom-turned-laundry area. Perhaps the pièce de résistance is the spa-like master suite, an addition that hinges upon a seamless connection between inside and outside spaces. Sandler calls it, “feeling at one with nature,” which is entirely evident through expansive glass on two walls. In fact, the remodel effectively resembles a cabin in Big Sur, where Robin and Fred eloped 25 years ago—a feel Robin was striving for all along.
A key factor in designing spaces for her clients is not only listening to what they want, but also getting to know them and their personalities. “I find Robin and Fred so down to earth,” says Sandler, who opened her architectural business in the Berkshires 30 years ago. “They are not pretentious; they are humble people, and the house had to feel that way.”

Sandler configured the clean, soaring space—effectively combining elements of wood, glass and metal—to include large, open living areas with several intimate niches. The house contains thousands of books, and Fred has a particular affinity for the library niche. (They are also in close proximity to one of their favorite places, The Bookstore in Lenox.) When she is not tackling a culinary feat, Robin gravitates toward her grand piano, a rebuilt Steinway from Flynn Pianos, that takes center stage in the living room.

Robin was in the rock-and-roll business for two decades, including a ten-year stint at Geffen Records as creative director. While at Elektra Records, she directed the Cars’ video, “You Might Think” which went on to receive the very first MTV Video of the Year award in 1984. She retired 20 years ago to raise the couple’s two sons—and her timing was spot on. “It’s a changing business,” she recalls. “Rap was coming in, and I wasn’t relating to rap.” Robin promptly switched gears to pursue classical piano and creative writing—regularly attending BSO open rehearsals and recitals in Ozawa Hall, both at nearby Tanglewood.

red has been referred to as the “cartoon king.” He was president of Hanna-Barbera’s cartoon studios in the 1990s. He is credited with discovering Seth MacFarlane, the creator of the TV series “Family Guy,” fresh from college, when he hired him to work on Hanna-Barbera cartoons. Seibert’s biggest audience is online through his Channel Frederator network. Cartoons run on YouTube, but his network promotes them, sells ads and distributes the proceeds to some 2,000 of his video makers. He still serves as executive producer of “The Fairly Odd Parents,” a TV series he began producing in 1998. 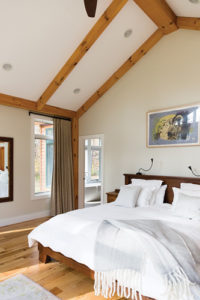 In the Berkshires, Fred likes to stay put. “I’m an introvert in an extroverted business. I need a place where I can recharge,” he says. He has a workshop where he continues to feed his lifelong affinity for building. Pieces of his original design punctuate the home, ranging from wood and metal bookshelves to a live-edge desk; the bench, just inside the kitchen entrance, was the first piece he built for the couple’s Berkshire getaway. He also regularly adds to what he calls “an obsessive poster collection,” many of which are on display throughout the house.

“We agreed we would do what it takes to make it the home we wanted,” says Robin of the enormous undertaking that included exterior landscaping. Save for ripping out the ragweed and goldenrod lining the driveway and planting a row of Hemlocks to screen their addition from the neighbors, the Seiberts let the property sit for two years without alteration. Slowly, Robin began landscaping. With the help of Rob Genarri of Glendale Botanicals, the two worked together carving out more lawn, putting in beds, and creating meandering paths.

Above all else, Robin and Fred exude thankfulness—for having met Sandler and for committing to create a home where they can grow old. “We honor each other’s creativity and respect it,” says Robin of her husband. “As did Pam,” Fred chimes in.

Come Christmas, the Seiberts’ two sons will join them in Stockbridge. Joe, 24, is earning a PhD in physics and Jack, 22, a programmer at a video game company, will both make the trip east from California. Holiday traditions include venturing to Seekonk Tree Farm in Great Barrington to select and cut a tree, walks in nature, and skiing for Robin and her sons at Ski Butternut. “It’s fantastic,” says Robin of this cherished time together. 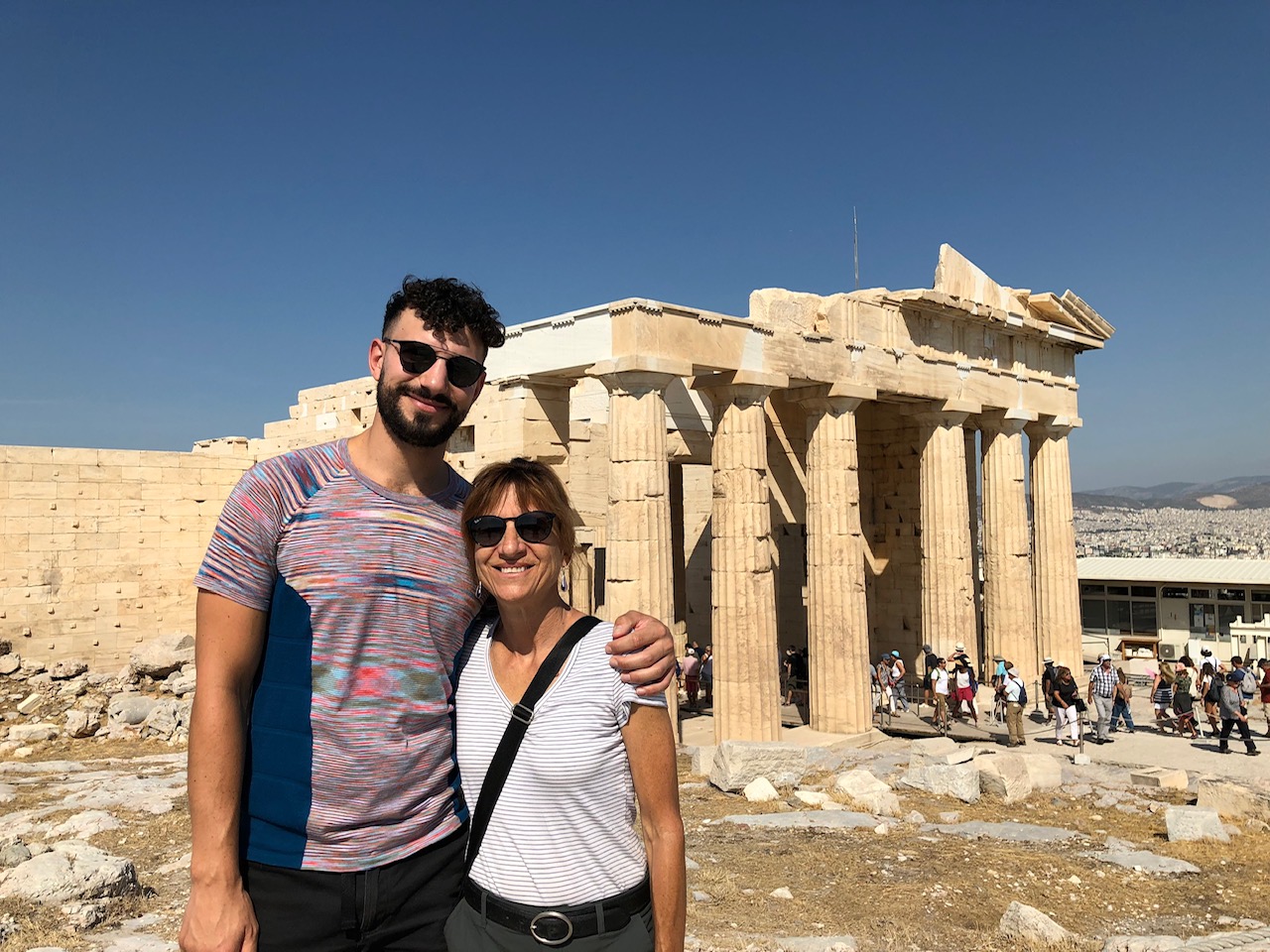 Breaking the rules in Greece 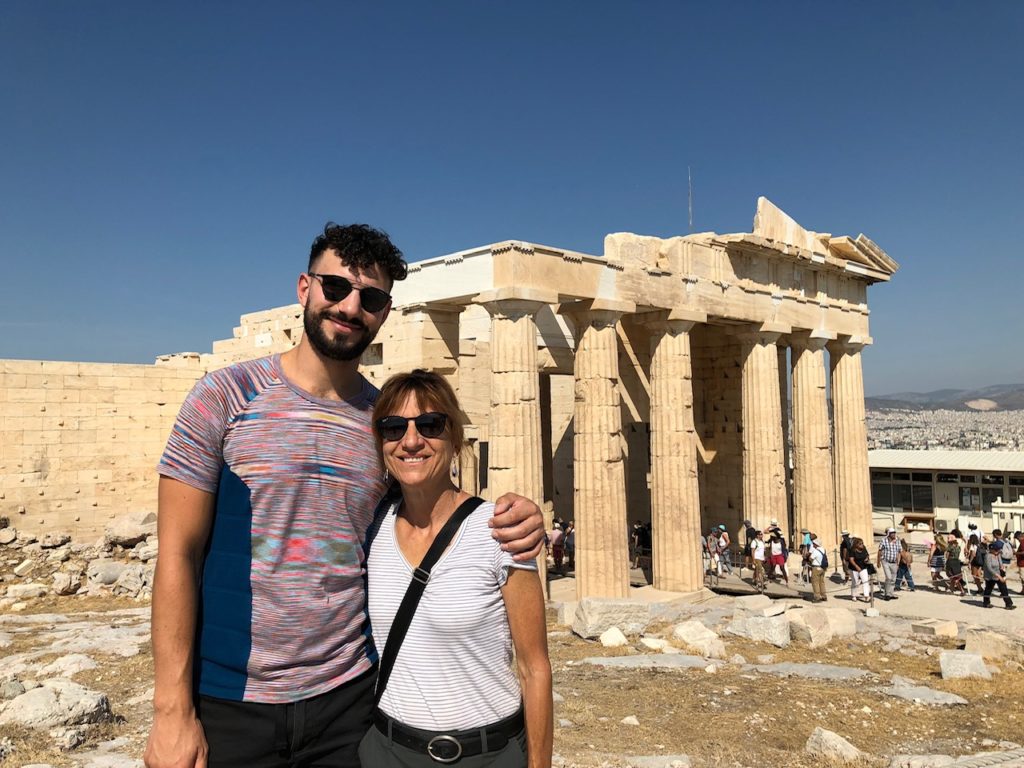 I first had the opportunity to travel to Greece when I was about 21. In the summer of 1981, as a graduation present from my father, I travelled around Europe. I met an art historian in Rome. It was the last stop in my journey, and he asked me, “You wanna go to Greece?”4

Of course, I wanted to go!

I didn’t go to Greece.

That was nearly 40 years and three kids ago. Last month I finally made the trek (the flight is longer than you think) with my son. 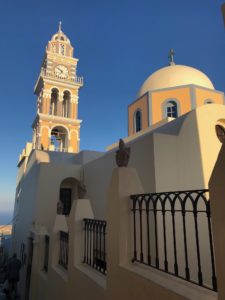 Of course, we toured the architectural essentials: The Acropolis, the Parthenon, so many museums. Visiting the Palace of Knossos in Crete gave me chills, just knowing that the site was settled before 6,000 B.C. Many monuments and buildings were undergoing major structural repair. At these structures and even smaller spaces and residences, I saw the gold star of historic preservation. It also became obvious, while marveling at the layers of structures all over the islands, that I was seeing the bedrock of the fundamental rules of architecture.

The monumental history and beauty of Greece is matched, and balanced, by the people who inhabit the islands. Everywhere we went, locals implored us, “Relax.” Forever reminding us that it was time to slow down and take in the entire essence of their beloved sights. And to eat! The food in Greece is unreal. Stuffed eggplant, octopus, fresh sardines, tzatziki…I’m not a big eater but…there is nothing more important than food to my son. He would find places for us to eat and snack (the benefit of having a phone and a million food review apps), and we were never disappointed. We tried everything there was to try. I could taste the Turkish influences in the spices and preparation of the food. Wine is the least expensive thing on the menu, and it is good wine and plentiful. 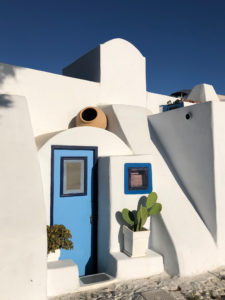 Color is also abundant. Everyone talks about the opulent blues and whites of Santorini, but to see it in “real life” is extraordinary. The sea is a canvas for the white stuccos and blue sky. There are no rules in the architecture there. Really modern design lives side-by-side with older structures, and there are layers of it, each trying hard to work with the landscape of that gem island. 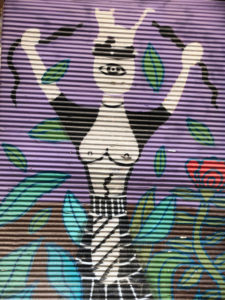 Strangely, or perhaps naturally, there is no shortage of graffiti, especially in Athens. My son is a graffiti connoisseur, and he was immediately drawn to the street art, which was strongly cultural in the sense that the clandestine artists spray-painted modern renditions of gods and goddesses and other national touchstones on the stucco walls and marble columns and shop gates all over the city. It made me cringe a little…the ancient marble (there is marble EVERYWHERE) covered over with political messaging, obscenities, and graphic novel icons. Yet, it fits. The whole thing makes sense. New. Old. Modern. Classic. Ruined. Rebuilt.